Thanks for being out here!

That is the response I got from many people we've met on the street these last two weeks. There was a middle aged couple we talked to from Santa Cruz Bible church who thanked us for being out on the street sharing Jesus with everyone. I had brief conversation about some of the anti-Catholic remarks I've received from some people I knew from that church. They said that that was not the norm, and that it was important to focus on the things we have in common rather than complaining about our differences. It turns out he had my father for a teacher in the early sixties and that they new my daughter and son in law.

Many people were happy to get a free rosary or a miraculous medal including a three year old who's father had not been to church in a while but had grown up in Japan with his missionary father who was an Evangelical. We spoke briefly then he thanked us. One teenage boy named Russell came by and wanted a miraculous medal. I asked him if he wanted us to pray for him and he declined and then I asked about his family and he said his uncle had cancer and we could pray for him. Another teenage boy came by on his bike and got a rosary. We gave him a pamphlet on how to pray the rosary, then I asked him if he went to church. He said he went on Christmas and Easter. I asked him if he ever prayed and he told me he did when he had problems. I told him I love to pray when things are going well because I'm grateful for all God’s blessings. He thought about it and nodded his head in understanding. Then I posed a question for him. I said "You love your mom right?" he said yes. Then I said "If you only saw your mom on Christmas and Easter how would that be?" That would not be good he said. He understood where I was going with the conversation. I told him God loved him and wants to be in a relationship with him and bless him. He understood and thanked me again before riding off on his bike.

Suzanne spoke to a young couple named Henry and Mia from UCSC. Henry was raised Catholic and about to graduate, but he hadn't been to church in a while. Mia had never stepped foot in a church and was curious about God. I told them that everybody deep down wants to be loved. They both agreed, and we began to share with them our experience of Gods love. I encourage Henry to pray and ask Jesus for direction and to listen to his heart about his new life after college. They were both hungry for God but they didn't know it. Like lost sheep without a shepherd. You could see it in their eyes.

There are many practicing Catholics from our area as well as many from out of town who are surprised to see us sharing our faith on the street. Many are happy to see all the free material we have on display and are pleased to receive what we have to offer.

They are all very grateful and thank us for being out in public sharing our faith. It gives many hope and encouragement about the future of the Catholic Church. We have many challenging moments as well but they are few and far between. Over all it is a joy and a blessing to serve the church this way.

God bless you all,
Tim 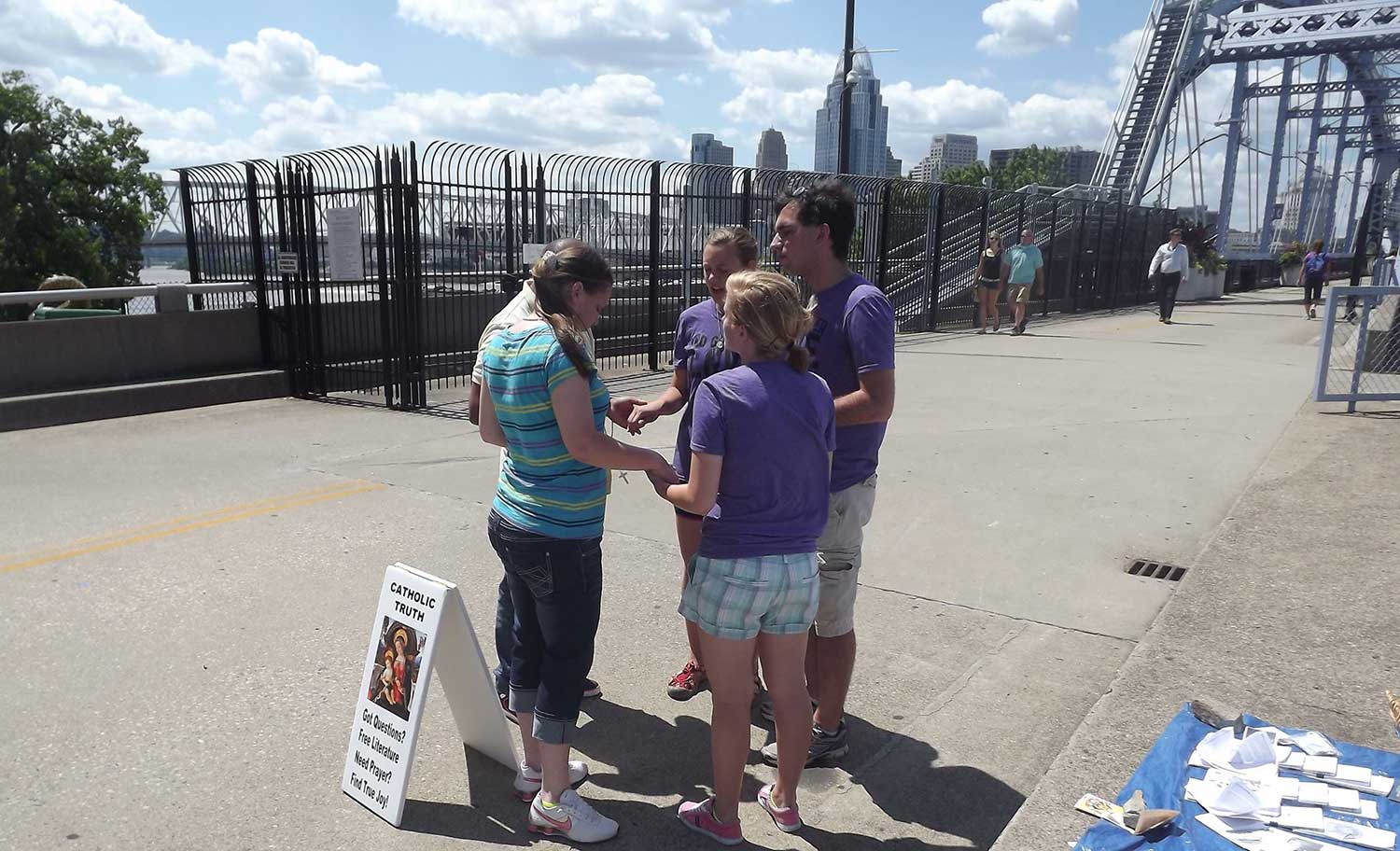 St. Paul Street Evangelization is a grassroots, non-profit Catholic evangelization organization, dedicated to responding to the mandate of Jesus to preach the Gospel to all nations by taking our Catholic Faith to the streets. We do this in a non-confrontational way, allowing the Holy Spirit to move in the hearts of those who witness our public Catholic presence. St. Paul Street Evangelization provides an avenue for you to share the Person of Jesus Christ and the truth and beauty of the Catholic Faith with a hungry culture.

In order to build a civilization of love, we must first create a culture of evangelization.